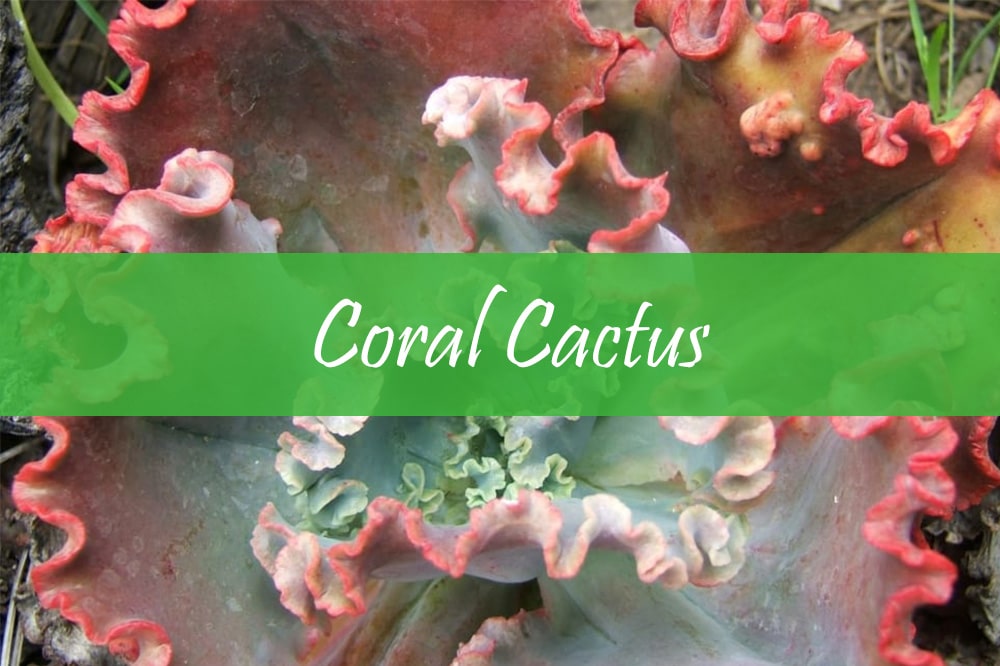 The Coral Cactus, or Euphorbia lactea Cristata, is an incredibly unique succulent plant. It pretty much looks like a large coral reef with a thick green stem and crinkled cabbage-like leaves that come in a wide variety of colors and can only reach up to 2 feet tall when grown in a container.

Coral cactus is an easy to grow succulent that can be grown year round. It’s not frost tolerant, so you may want to bring it in if the temperature is expected to remain below freezing for an extended period of time. It makes a great houseplant, and is easily grown in a container.

Coral cactus is comprised of two major types of succulent, which are from the Euphorbia genus family. It’s surprisingly large with thousands of plants species. The base of the plant is often a Euphorbia neriifolia, which has broad and oval leaves. Furthermore, the plant is selected for its tendency to grow tall and straight. The Euphorbia Lactea plant is also from the ‘Cristata’ variety, which has large, and fan-like lives. During the grafting process, these fan-like leaves are the key aspects of the plant to consider.

A Word of Caution

Similar to plants from the Euphorbia species, the base and the crest of the plant might consist of sharp spines. These spines might lead to irritation, and you need to wear protective gloves when handling the plant. Also, ensure that you graft the plant correctly to avoid over cutting the key sections.

The plant classifies as a category three plant, and it must not be distributed or disposed of. Thus, it may not be released to the environment, unless a legitimate agency regulates its distribution.

The plant species is naturalized, especially in the drier inland areas of Australia. More so, the plant has been famous in various parts including Queensland and New South Wales. Plus, its also occasionally naturalized to the West and South of Australia

In places such as the Sonoran Desert, the plant grows in broad areas, and the thorny bushes of foothills. Furthermore, the plant species is also common in creosote scrubs, coastal scrubs, desert grasslands and more.

Even more, the plant also invades natural grasslands and pasture, where it competes with resources with various other native species. It also stops the movement and causes injuries to wild animals. Reptiles, birds and other small mammals are often impaled with the spines, and eventually succumb to death.

Coral cactus does not have leaves, and it has spines instead. On average, it has 6 to 12, which will develop from each areole. More so, the young branches consist of silvery yellow spines, which many darken to grey as the plant’s age.

Plus, the spines develop a dense layer, which might obstruct the growth of the spines. Slower growing or old branches might also feature sparse or short needles. As the spines fall from the mature plants, a brown, black bark is revealed. It often becomes scaly and rough as the plant’s age. 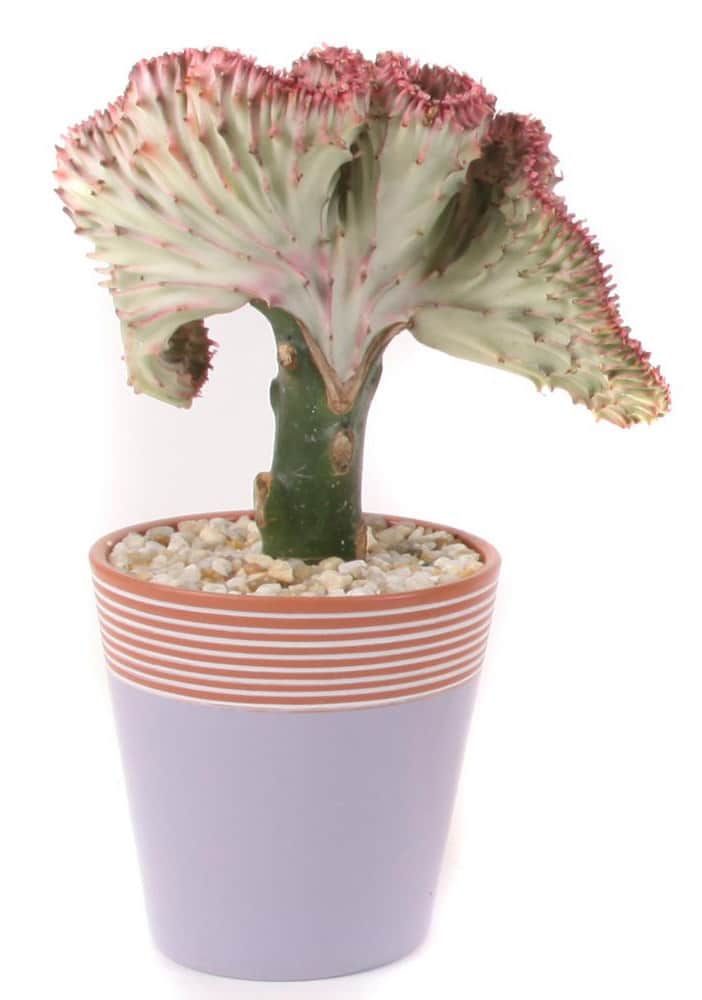 Furthermore, the flowers in coral cactus are usually pink or white, with streaks of lavender. They also average at one inch wide and are displayed at the joint tips, and they bloom in mid-summer times. Plus, most of the plant is fleshy, with green fruits that are sterile and pear-shaped, almost round in size. On average, the plants are 4cm long and may produce flowers all through the year, which might develop new fruits from the previous seasons.

Growth and Propagation of Coral Cactus

To graft coral cactus successfully, the following steps are needed: 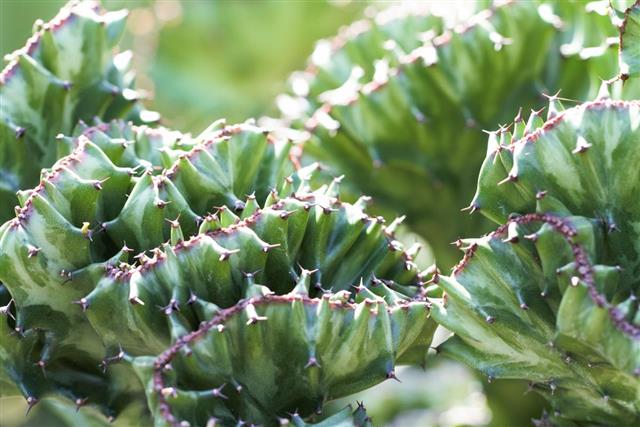 These plants tend to be hard and are not susceptible to several issues. However, there are some points you need to consider to keep growth complications at bay. They include:

The grafted coral cactus is rarely subject to reverting, and the rootstock often develops as required. If this occurs, it will lead to the development of a secondary stem of neriifolia, close to the lacteal crown. Thus, you can leave it that way, and this plant might have an unusual appearance. Or you can remove it carefully close to the crest and let the latex scab over the cut areas. 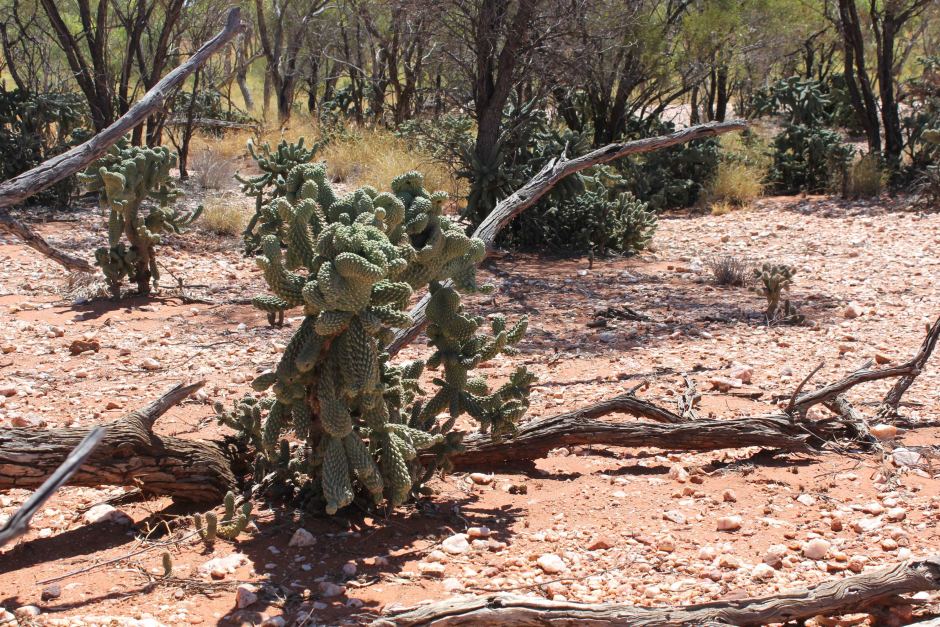 While latex sap is deterrent to pets, mealybugs and other types of insects still affect the growth of the plant. Consider using cotton placed in some rubbing alcohol, to help remove the pests.

More so, spider mites might also compromise the growth of the plant. Since insecticidal soaps can affect the plant, use a spray of water to remove the spider mites, and their eggs. Then, let the plant dry thoroughly. Even more, using heavily diluted neem oil is excellent for the plants.

In humid environments with minima airflow, powdery mildew might occur. It is best to prevent this disease, as many treatments might compromise the leaves of the coral cactus. If mildew appears, you can use baking soda to treat the plant.

If the soil is too wet, the plant might suffer from root rot. Use the correct potting mix, and some water when required to stop any rot. Once the cactus starts showing any damage, its often too late to save the plant from rot.

How Do You Graft Coral Cactus? 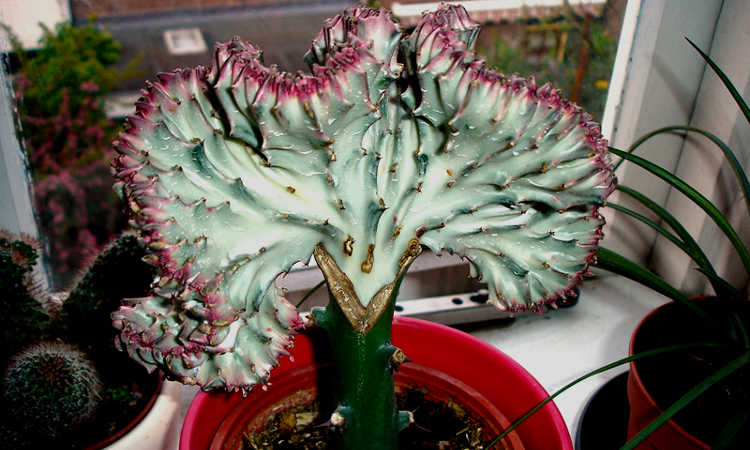 Even if most euphorbias plants are easy to grow by using cuttings rather than seed, coral cactus only grows through grafting. The procedure is often complicated. Just as previously mentioned, ensure you put on protective gloves when grafting the plant.

New plants should grow in partial shade conditions, and you can move them gradually to the full sun. In hot areas, the plant should grow in shaded areas, especially in the heat of the day to stop sun damage. When grown indoors, place the plant in a window with adequate light daily. As the crest grows towards the direction of the sun, ensure you pot it regularly to stop any lopsided growth.

Similar to most succulents, coral cactus will thrive in warm areas, of at least ten degrees centigrade in temperature. Any temperature below this is not suitable for plant growth. 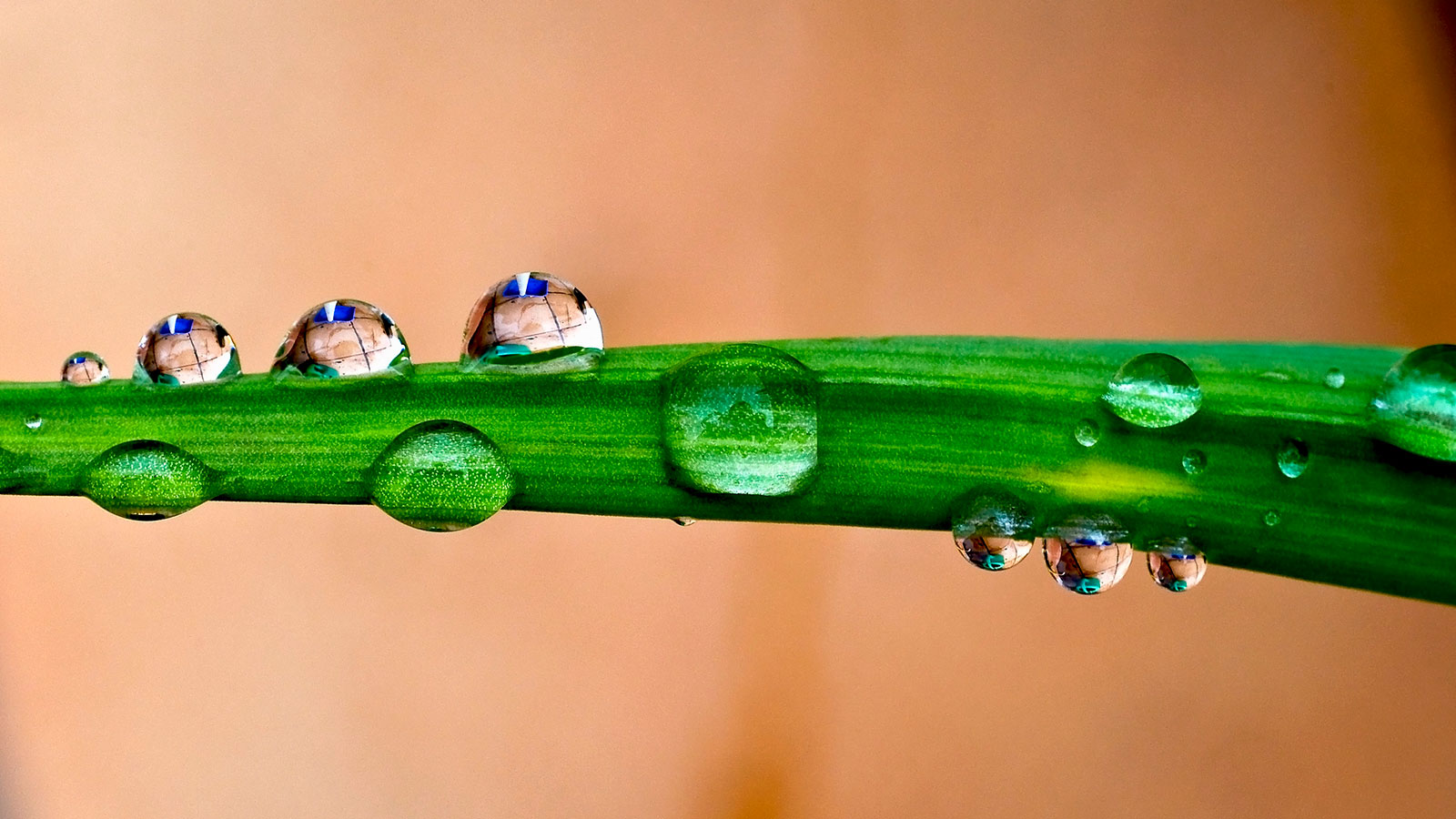 Quite contrary to most succulents and cacti, coral cactus is not resistant to dry conditions, even though it thrives in dry soil. Moreover, soggy soil might lead to root rot complications.

A proper technique is to water the top sections of the soil and avoid wetting the ground. Never water the plant directly, and instead of water the soil and let it run out of the pot base. Also, any coral cactus that is wilted probably suffers from this issue of overwatering.

The plant also enjoys humid environments, such as grow rooms. The grow room has to have the right conditions required for coral cactus to grow.

The coral cactus will need more frequent watering during its active growth period in the spring and summer months. You can reduce the frequency of water during the fall and winter.

Growing plants often requires a specific process and set of steps to achieve the best results. In particular, coral cactus is a delicate plant, and it involves a set of particular growth conditions for optimal growth. The plant does not thrive well in soggy soil, and this might lead to root rot. More so, you need to wear protective gloves, because it has spines, which might injure your fingers. Coral cactus is also possible to graft, and we have outlined the steps involved above.

Furthermore, the coral cactus plant does thrive in soggy soil, but it requires humid conditions. It is best to water the top sections of the plant or ensure water drains out from the pot base. Grown correctly, coral cactus can thrive, and even produce young seedlings.

These little guys are super easy to care for and can survive long periods of no watering, so they are a great option for anyone who is really busy

The Coral Cactus is one of the more colorful cactus, with its flower heads sporting a beautiful array of bright red, pink and orange. The flowers of the Coral Cactus are quite showy, and can make a great addition to any garden or landscape.