Published: Mar 23, 2017 · Modified: Mar 6, 2022 · This post may contain affiliate links. As an Amazon affiliate, I may earn a small commission from visited links at no additional cost to you. · Leave a Comment

One of the most common problems I’ve found face green thumbs is the lack of time to give their gardens the kind of attention that they truly require. Specifically speaking, your typical garden requires you to refill it every week, in addition to regular (despite much less than a normal garden) in order to maintain longevity.

This was especially a problem when it was finally time to pack up and go on our annual three-month vacation, and I wasn’t willing to let my precious investments die out.

I had to leave them under someone else’s care and only came to learn of the Miracle-Gro AeroGarden Reservoir later, but you hopefully won’t have to go through the same trouble.

For Whom the Miracle-Gro AeroVoir AeroGarden Reservoir is for? 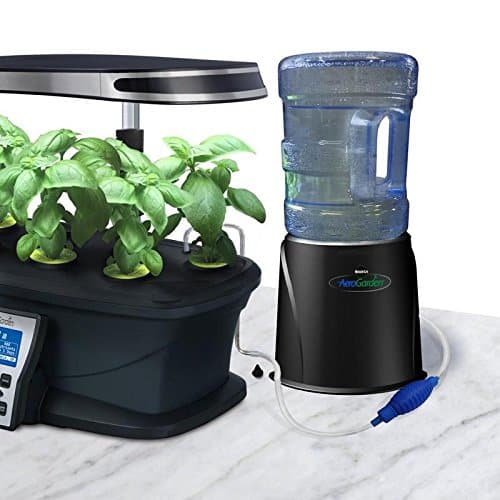 If you’re the kind of person that’s constantly away from your home and thus have to worry about who’s going to feed your plants, this may be the perfect solution for you.

The AeroVoir AeroGarden Watering System as it is, already makes life relatively simpler by reminding you to water your plants, but don’t forget that as they grow older, they use proportionally higher amounts of it.

Imagine a scenario where you leave them unattended for two straight weeks. It doesn’t paint a very pretty picture because things will spiral out of control too fast to even recover from.

This product is meant for the kind of person who worries about always keeping a close eye on their garden while they’re away. The other category of people that would find this useful those who just want to do the manual work less often.

Things to consider before buying an AeroGarden AeroVoir Reservoir

The Miracle-Gro AeroVoir AeroGarden Reservoir is completely complementary to the original product; you guessed it, the AeroGarden. The whole purpose of the system is so it maintains a minimum amount of water in the tank, proportional to how much your plants use up. This way, your plants

The AeroGarden is a nice extension of the original product as brings with it a lot of pros along with it. Not to bring the fun crashing down all at once, however, here are the top five reasons that should bring you to consider getting an AeroGarden Reservoir for yourself.

The AeroGarden brings with it a ton of advantages to the average user. One of these is the fact that it adds at least an extra gallon of water, which means you have three weeks less to worry about the mundane, everyday task of replacing that tank of water every other week.

This, as has been mentioned before, is really useful if you’re going to be away from your garden for extended periods of time. The Miracle-Gro AeroGarden AeroVoir Reservoir does this by ensuring that a minimum amount of water is always reserved for your plants at all times. If it drops, it gets down to work.

In our experience, however, despite all the benefits it brings, it’s not without its drawbacks. One of these if the fact that at times, the Miracle-Gro AeroVoir Watering System allows the water level inside the AeroGarden tank to drop to tremendously low levels, something that’s obviously quite harmful to the plants given extended periods.

After contacting the support team, however, there turned out to be a simple fix for the issue - simply raising it to a higher level using a stack of books or magazines, for instance. All in all however, the pros by far outweigh the cons.

The AeroGarden is a pretty flexible piece of technology. If you’re into the gaming lifestyle, you could think of it as a DLC on top of the original game. It works fine on its own, sure, but it’s also much more awesome with the additional details added on top. What’s more, as long as you have an AeroGarden, the Miracle-Gro AeroGarden Reservoir is compatible and will work regardless of the model you currently have.

This is a pretty nice feature that you could think of as back port compatibility, saving you the time you’d otherwise spend looking for a newer upgrade then further upgrading to the Reservoir. For this reason, it’s quite obvious that the AeroGarden team put quite an amount of effort to make the product feasible - the only requirement for getting an AeroVoir Reservoir is having the AeroGarden itself.

BPA, (Bisphenol A) is an organic synthetic compound commonly found in polycarbonate plastics and epoxy resins. It’s often used in containers that are used to store food and beverages, such as water bottles and other consumer goods. Some recent research has shown that BPA can seep into beverages and food made from containers.

Exposure to BPA is a growing concern addressed by the World Health Organization because of the possible health effects it poses to the normal functioning of the brain, and prostate gland of fetuses, infants and children.

Additional research has also suggested a possible link between ﻿﻿BPA and increased blood pressure and in the cases where the plastic is heated, for example in microwaves, with cancer. There is an increased backlash towards companies around the United States that tolerate the use of the compound in any of its products.

However, the Food and Drug Administration has said that on several occasions stated that BPA is safe at the very low levels that occur naturally in some foods. The good news is that the AeroVoir doesn’t jump onto the bandwagon of the numerous BPA-using industries out there, and the company states that the product materials are completely BPA free.

At first glance, I’ll admit the AeroGarden AeroVoir Watering System had me surprised, skeptical even. The idea behind it was so revolutionary, so novel that I couldn’t accept it had grown out of its cocoon and into fruition.

As such, I’d expected it to be a completely complicated piece of technology (I’m not the biggest fan of new novel ideas, by the way. I prefer to see how the general public perceives it before jumping in). However, after owning it for a few weeks, I realized I was just being paranoid, and it turned out to be a relatively simplistic machine to use.

This makes it easy to supply water to the garden with relative ease. If you aren’t s gifted when it comes to technology, just like me, you can even call one their specialists over to have them install it for you.

Arguably the most important of the AeroVoir AeroGarden reservoir is it’s affordability. It’s quite cheap for the average consumer. The original product itself (the AeroGarden) is also quite affordable in my view, perhaps one of the things that make it so popular. Since the AeroGarden Reservoir is sold separately, its affordable price also gives it quite a high rating in my books.

The biggest drawback with the Miracle-Gro AeroVoir AeroGarden Reservoir price was the cost of the individual parts, especially the bulbs. By the way, ensure you never miss pruning day or otherwise let the herbs grow into the bulbs.

This damages them and can be pretty expensive to replace. However, once you are able to get your head around that, the AeroVoir should be cinch to handle. It comes at an affordable price, and considering how simplistic it is to handle and install, it’s a definite win for the company, and for you.

General reception of the AeroGarden Reservoir

One recurring theme regarding the AeroVoir is that whereas it’s great for use with the AeroGarden, it is not very widely recommended for use with the Grow Bowl accessory. The official explanation is as follows:

However, a rough scour of the internet will reveal a general air of approval for the product. Users had an extreme appreciation for the novelty of the idea and the fact that it was pulled off so beautifully on first a first attempt. The AeroGarden Reservoir has also been highly remarked for its compatibility and ease of use.

There seemed to be a rapport around its use, and another general consensus regarding the exorbitant cost of the bulbs. This is due to the fact that despite building standard fluorescent bulbs, they use their own patented sockets, essentially forcing you to buy theirs instead of regular ones. However, this doesn’t really regard the Reservoir itself in any way.

Complaints regarding the Reservoir itself are scarce, if any, and most seem to agree that it’s a worthwhile investment. The few that don’t agree have complaints regarding the price, because whereas it can be bought cheaply from within the US, it can be as expensive in other countries. Overall, however, it’s a solid product that delivers what’s on the box.

No invention is without its drawbacks and the AeroGarden Reservoir is no exception. It has some flaws but they are not so big that you would be scared of them. There might be competitors willing to accept you with open arms if you plan to buy other products. Of course, not all of can them offer the same kind of solid performance as the AeroGarden, but here are the top three DIY alternatives if you decide to go with them.

There are currently no major players regarding alternatives for the AeroGarden reservoir. Most alternatives consist of getting your hands dirty and making one on your own. Be warned, however, that we ourselves haven’t tested them as of yet (except the last option on this list because it came i great detail), but the reviews around them were generally positive,

The cost of the AeroGarden Reservoir comes off as expensive in some areas, especially those outside the US. Most DIY alternatives don’t cost very much, and employ the use of tools and equipment that are easy to find or otherwise cheap to buy. One such alternative, requiring very little knowledge and involves zero electronics (as some people seem to prefer) is described by Munk Axis here

Unlike the first alternative, this one has the benefit of detail on it’s side as Sally takes you through the whole process step by step.

If you happen to be more of a visual person who finds it easier to focus with pictures at hand, you can find Side Bar Sally’s simple DIY alternative to the AeroGarden Reservoir on her blog (http://sidebarsally.blogspot.co.ke/2012/09/my-aerogarden-diy.html). The response regarding her post was also generally positive, so it is also worth a shot.

In his much acclaimed book, ‘How to Hydroponics’, Keith Roberto offers a relatively simple yet effective way of dealing with the cumbersome task of indoor gardening. It may not be for everyone, but its simplicity is its biggest selling point.

He offers great detail and general advice regarding how to approach not only the Reservoir, but hydroponics in general. It gives a great overview of what to expect along the way and how to overcome falls that you are sure to meet. In one of the chapters, he guides you on how to effectively construct your own home AeroGarden (including the Reservoir).

As mentioned before, the Miracle-Gro AeroVoir AeroGarden Reservoir Watering System has its own drawbacks, but so does every other product out there. However, it definitely addresses the issue regarding how often you have to switch out your water (not only because it runs out, but with time, minerals build up at the bottom of the container and you have to take care of them or lose performance, possibly damaging your machine).

Its greatest benefits are the fact that it’s:

The AeroGarden Reservoir Watering System by Miracle-Gro is an effective product. It does an excellent job and takes complete care of your garden. With this innovative product, you can easily leave your worries and hassles on this dependable system.

This site uses Akismet to reduce spam. Learn how your comment data is processed.